skip to main | skip to sidebar

Oversleeping, Readjusting and Thankful for Compex

This is kind of a three part posting. First things first. I actually slept straight through last weekend’s time trial. Which is amazing because I never oversleep. Never. Except for last Saturday so I guess I can no longer say never. I can’t take too much credit for this. I have three cats. Three very food-motivated cats. (I also have a dog. I wanted to throw that out there so that no one thinks that I’m just the crazy cat lady.) Every morning the cats wake me up to feed them. They are usually pretty good about waiting until the alarm goes off, although some days they start a few minutes before the alarm goes off. If I don’t get out of bed as soon as the alarm goes off, they start ‘eating’ me - probably as a warning about what will happen if I don’t get out of bed and feed them. Small kitty-cat nips on my nose, fingers, whatever they can reach are very effective at getting me out of bed. Once they are fed, I can go back to sleep if I want but usually I stay up and get my day started and, if I have somewhere to be, I definitely stay awake. Unfortunately, that didn’t happen last Saturday. My guess, they were probably just as tired as I was.

I had some really bad news earlier this summer and hadn’t been sleeping much at all over the last month. Finally, last week Monday, I had a full night’s sleep - eight entire hours without waking up. I felt so much better - and then my air conditioning broke. Even with the windows open all night and fans blowing, the house was in the 90s for much of the week and sleeping was really difficult. The air conditioning repair company couldn’t come until Friday morning so Friday was the first night that the house was cool enough to sleep well. Knowing how tired I was and that I had to leave the house by 7:30 to get to my race on time, I got everything ready on Friday night and went to bed at 10 with my alarm set for 6:00, a fairly normal time for me. And I woke up, surrounded by sleeping kitties, at 10:17 - way too late to get to my race. Obviously, the kitties were just as overtired from not sleeping as I was!

Now for the readjusting part. Due to the bad news, I had to pull out of two races that I planned for this season: the Lums Pond Duathlon two weekends ago and the Short Course Duathlon World Championships next weekend. Having to drop out of my goal race for the year combined with a lot of sadness and a lot of stress has really done a number on my motivation. Reading blog postings by the rest of the team has been really helpful and has gotten me out the door on several days when I’d rather have been curled up on the coach. And I do still have three upcoming races that I’m registered for and should be able to make: the HalfFull Triathlon, the Army 10-Miler, and the Richmond Marathon. But I’ve realized that I’m not going to have the level of performance that I wanted to have. So I’ve been readjusting my training. My mileage and endurance is far lower than it should be at this point but I’ve decided that I’m just going to accept it as it is, increase it gradually, not worry too much about the speed work I should have been doing, and do my best at what I can do. I’ve also realized that Compex is going to be essential to my succeeding with my adjusted plan. While I’m not going to stress myself about where I am compared to where I should be, I do realize that consistent training going forward is going to be essential to achieving my revised goals and Compex is going to be essential to my consistency.

Finally, this week has been far too busy and I haven’t had as much time as usual to sit at my desk and work. Lately, I’ve been done with each week’s work by Friday. This week, I’m going to need to work all weekend. But the real downside is that I only was able to fit in Compex sessions on two days. And boy did I feel that! I was really sore the last two days, including a weird back pain while I ran, and couldn’t figure out what I had done. Then I realized it wasn’t what I had done. It was what I hadn’t done. Without my daily Compex Endurance and Active Recovery sessions, my muscles were feeling far more fatigued and it was impacting the quality not only of my workouts but also of just walking. I’m going to try really hard not to make that mistake again!

Posted by Michele at 9:45 PM No comments:

On Saturday, I’m doing my first stand alone time trial race. I don’t know if it’s going to be easier or harder than the bike leg of a triathlon. Obviously, I don’t have any excuse to not push as hard as I possibly can so I have a feeling that I’m going to be really hurting by the time I get off my bike.

I’m incorporating the Compex Sport Elite into my preparation. Today is a big work day - which for me is a lot of time laying on the couch on my computer and lots of time to run some Compex Endurance programs. I did my quads yesterday so today I plan to do at least my hamstrings and calves. I’ll follow that up with Active Recovery. Tomorrow, as the pre-race day, I’m planning on using the Massage program on everything I can. Thankfully it’s another busy work day so I should have plenty of time for that. My other preparation task is to bring my bike into the shop to change cassettes on my disk wheel and wheels on the bike. I haven’t race the disk before so I’m hoping for low wind and good handling.

My start time is 10:36 am so I have plenty of time to drive to the race site (about 2 hours) in the morning, do one or two pre-warmup routines (probably calves and quads), and warmup on the bike itself. Once I can breathe again after the race, I’m planning on using the Recovery Plus routines both at the race site and after the drive home so that I’m ready for a good brick workout on Sunday.

I’m really excited that the new pads arrived today as some friends are going to be in the same area to pre-ride the Chesapeakeman course that day and, if timing works out, we’re going to meet for lunch after our finishes. With the new pads, I can let them also enjoy some Compex recovery time while we refuel.

Posted by Michele at 6:27 PM No comments:

Happy to report that Compex Active Recovery doesn’t just work to help me recover from workouts but also to recover from work! I work part-time as a bike mechanic but hadn’t been scheduled since late June and yesterday was my first day back. I was somewhat dreading it - not being back to work but how I was going to feel at the end of the day or the next morning after standing up for 8-hours for the first time in six weeks. Usually, after even a week or two off, my legs are really tired at the end of the day and I’m sore the next morning. But I ran my Active Recovery programs when I got home yesterday, starting on my back and then my quads and I’m feeling great this morning. Another 8-hour shift today and I’m going to try to run an Endurance program before I head in so wish me luck. Hopefully I’ll still feel good tomorrow!

Posted by Michele at 7:51 AM No comments: 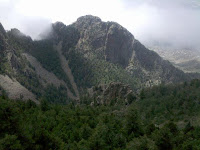 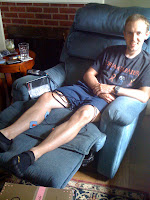 One of my friends and coaching clients, Sean, just completed the La Luz Trail Run near Albuquerque, New Mexico. http://www.laluztrailrun.org/ It took him 2:37 and he did it with his calves cramping on the uphills. He did this despite a knee issue (plica syndrome) that has really limited his training so I’m really proud of what he did.

During his training, we’d either meet at a coffee shop or he’d stop by my house, so that he could use my Compex Sport Elite on his tight calves. The day he returned from New Mexico, he texted to see if he could come over the next day and use my Compex for his quads which had really taken a beating on the downhill at about mile 6 of the run. He came by and spent about an hour and a half using the massage program on his quads and calves. I was pretty impressed that the first thing he did upon returning to town was to use the Compex!

Some history, I have had arthritis since I was 5 so I’m pretty used to managing it and usually it doesn’t impact what I can do. One thing that really helps is to keep active, stay in shape, and build strong muscles to support my joints and take the strain off of them. I don’t have to take any medicine except occasionally some Tylenol so I’m in much better shape than most people with arthritis.

Unfortunately, I have some things going on in my personal life right now that really threw me off last week. I wasn’t eating or sleeping well and I really couldn’t get motivated to get out and train as often as I should or usually do. The result is that by last night I was exhausted and really ready to sleep. However, the arthritis in my left wrist and elbow hurt so badly that I couldn’t fall asleep. This is the first time that I’ve had this happen since I received my Compex Sport Elite so rather than take Tylenol, I decided to try the massage program on my wrist and elbow. I put pads on both joints as well as on the muscle closest to the joint. It felt good as I was doing it (although watching my fingers twitch was interesting): however, when I finished, I still had the pain.

Not too surprising really. I know that Compex is designed for muscles, not joints. But I’ve been so happy with Compex and how well it’s worked every time I’ve tried it for every pain that I’ve had, I thought it might work for the arthritis also. In the end, I turned to my faithful Tylenol and managed to fall asleep. Still a little sore this morning but I’m sure it’ll pass and today’s ride will help it go away completely. In the meantime, I’m running the Compex endurance program on my traps while I work this morning and I know that is an area in which Compex will be successful!